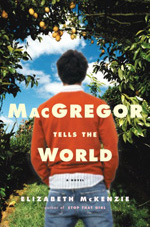 MacGregor Tells the World
A Novel

An inventive and dazzling debut novel–at once a mystery of identity, sly literary satire and coming of age story–capturing a young man’s impossible and heroic first love. Macgregor West, orphaned as a boy, is on quest to understand the mystery surrounding his mother’s untimely death.  On a foggy San Francisco evening, guided by a stack of old envelopes, Mac finds himself at the mansion of cultural icon Charles Ware and encounters the writer’s beautiful and enigmatic daughter, Carolyn. Soon Mac is seduced into the world of the eccentric Ware family and a love affair with a woman whose murky history may be closely linked to his own.

MacGregor Tells the World is a poignant and hilarious ride through present day San Francisco, a city brimming with memorable characters who help Mac discover just what story is his to tell.

“Elizabeth McKenzie’s wonderful, winning and sympathetic novel frees you by enchanting you. Her hero, MacGregor West, glides around San Francisco, dappled in the liberal summer light of first love, wolfing tacos, suffering truths. When MacGregor begs his girlfriend not to freak out but to freak in–to stick by him and his dizzy, determined way of reckoning with the world, make sure you take his dare. You’ll want to buy a drink for this kid and for the first-rate author who gave him to us.”
–David Schickler, author of Kissing in Manhattan and Sweet and Vicious

“Mac West makes you want to rack your brain and the dictionary for a weightier and more glorious word than tragicomic because his story is a tragedy (think Oedipus, think Romeo and Juliet), a comedy (divine in so many ways), a quest narrative (he seeks, simultaneously and nearly every waking second, his lost father, his dead mother, and true, abiding love), a coming of age tale (and he does, he grows up, but in a good way), a love letter to the city of San Francisco, and, above all, a romance of the very highest sort. It’s also teeming with writing that is startlingly inventive, witty, audacious, and often just plain beautiful, but that also reveals the author’s admirable sense of proportion when it comes to her own gifts (the prose never becomes a dog-and-pony show, although she must have been tempted!). Like Mac (whom I miss already), this book is a charmer and a heartbreaker, both.”
—Marisa de los Santos, author of Love Walked In and Belong To Me

MacGregor West is endearing and damaged, a free-spirited citizen of San Francisco — if free spirits have mother issues, abandonment issues and a long list of other issues, some with issues of their own.

“MacGregor Tells the World,” Elizabeth McKenzie’s charmingly off-center first novel, follows Mac’s unraveling of the mysteries of his mother’s life and, especially, her drowning death in Paris after he was shipped off to his aunt in California at age 9. The search is perilous– How much can a son bear to know? — but necessary, because Mac’s misery runs deep and wide:

“When his socks weren’t right, he felt restless and cursed. When miserable, he festered with images of people drowning, of oil spills spreading in the seas, of serial killers. . . . He worried that some form of recklessness or depravity lay sleeping like a wolf in every cell of his body. His mother had all but told him so.”

Before his quest begins in earnest, a short list of the best things in Mac’s stalled life reads like this: “[E]ating tacos, drinking bourbon until he passed out, and turning the pages of a book his cousin’s husband, Tim, had in the bathroom called Women of the Sud- Tyrol.” The life Mac saves will definitely be his own.

When his aunt sends him a shoe box filled with his mother’s “loose ends,” a stack of envelopes inside have the return address of a mansion in Pacific Heights. He’s there one day, trying to summon the nerve to knock, when fate hands him a girl trapped in a rollaway bed. It’s Carolyn Ware, older daughter of faded literary lion Charles Ware, and she recognizes Mac’s stash of envelopes as her father’s personal stationery. Carolyn’s family is intact — father, mother, sister — but she has issues even Mac’s issues haven’t imagined yet. They bicker; Mac gives her a tip about a taco stand with free radishes; they kiss; something blooms in a guarded but semi-life-altering way. Carolyn will be Mac’s entr?e, not just to a world of money and privilege but to his own longed-for history.

“She was a princess!” Mac thinks after their meeting. “Could it really be happening? The daughter of Charles Ware? And had he forged a link between his mother and the known world?”

He has. But the Ware family has secrets; each new discovery pushes him closer to the complicated truth and further away from believing in Carolyn as a lifeboat in his own sea of troubles. The novel’s plot works off a series of revelations, each more unexpected than the last, and also slyly suggests that literary lions may be more teeth and mane than substance. It benefits, too, from some tart observations about money and culture in America, and Mac’s obvious love affair with San Francisco. But it’s MacGregor West’s character, finally, that makes the novel work. What’s not to love about a young man this alive to his own senses: “He snorted his upper lip to his nose, and it smelled like a Bacon Thin he’d eaten in third grade.”

“MacGregor Tells the World” is full of sharply observed detail and moments both comic and poignant, all of them courtesy of a special character’s world view.
—Lynna Williams, a short-story writer, teaches at Emory University in Atlanta.

“A couple of years ago, a first-time author in Santa Cruz came out with a thoroughly entertaining “novel in stories” called Stop That Girl. The first person protagonist was so vivid and real, with such an engaging sensibility, you almost felt she was alive and growing up somewhere in California. It’s good to know Elizabeth McKenzie is still creating characters like that. This time we meet MacGregor West, an acerbic, deadpan guy who never knew who his father was and at 22 still has not come to grips with the mysterious death of his mother when he was 9. As the novel opens, he is approaching a home in Pacific Heights; its return address is on a batch of empty envelopes he recently found in a shoe box “full of his mother’s loose ends”, and his first clue in uncovering her past, and thus, his own. Here he meets another beguiling mess, Carolyn Ware, trapped in a fold-up bed by her much younger sister. So begins a tale that’s part mystery, part coming of age love story, part whirlwind tour of San Francisco. The end..feels true to life for these real if severely quirky characters. More, please.”
—Pamela Feinsilber, San Francisco Magazine

“Reading MacGregor Tells the World was like being kidnapped and carried off. I found myself peering into cryptic yet fully rendered lives and eavesdropping on delicious conversations…and completely unable, unwilling to tear myself away. Elizabeth McKenzie’s writing spirited me away to a stunning denouement on a carefully crafted tide of wit and words that can only be described as irresistible.”
–Alfredo Vea, author of La Maravilla and Gods Go Begging

“MacGregor Tells the World,” Elizabeth McKenzie’s first novel, is a story for romantics. Its main character, 22-year-old MacGregor West, is a literature-loving lost soul whose mother has drowned herself in the Seine. MacGregor, or Mac, spends the book uncovering his scandalous family history while romancing a San Francisco heiress and teaching a little boy about great literature.
It’s a heady mix, and has its share of pleasures. The heiress, Carolyn, is the child of aging literary lion Charles Ware. Charles is a wonderfully pretentious blowhard, and his circle of hangers-on is amusing and well rendered. As a young writer, Charles befriended a poor Italian American youth named Bill Galleotto, and the two began a decadeslong love affair that may or may not have been platonic. Charles immortalized their relationship in the barely fictionalized “Tangier,” and he’s now planning a sequel. Because he is estranged from Bill, however, he may lack for material.
With this groundwork in place, McKenzie seems poised to consider the importance of male friendship in literature and the relationship of a middle-class author to his working-class subject. She even throws in a parallel in Mac’s own life — a friend named Cesar, tragically killed in a motorcycle accident just after his high school graduation. She soon pushes these elements to the wayside, however, in favor of the growing love between Mac and Carolyn and Mac’s attempts to find out about his mother.
Carolyn is an unconventional character, combining a deep care for her younger sister with a tendency to throw money around. But her relationship with Mac is heavy on articulate banter and light on real passion. Mac’s mother never emerges as a fully realized person. We learn about her tragic childhood and her dissolute youth, but Mac never succeeds in his quest to render her whole.
Or perhaps he does. In one of his first conversations with Carolyn, Mac likens his mother to the Colossus of Rhodes — she’s a “wonder of the world” and he wants to “rebuild” her.
At heart, “MacGregor Tells the World” is not a realist novel. Its characters — particularly such supporting players as the drawling, toothless groundskeeper Glen — are over-the-top. Its set pieces, such as Carolyn Ware’s appearance on a fold-up bed, are straight out of daydreams. This is why the novel works best when it deals with the stuff of literary legend. The story of Charles Ware and Bill Galleotto — hints of Jack Kerouac notwithstanding — is larger than life. Globe-trotting celebrities with big egos and big appetites, these two mesh perfectly with McKenzie’s sensibilities. They have far more in common with the Colossus of Rhodes than Mac’s mother does, and they make far better monuments.
They have a lot of competition, not just with Mac’s mother but with a host of other supporting characters. “MacGregor Tells the World” is chock-full of plotlines, some far-fetched and some decidedly not. The novel seems to straddle the line between the real world and McKenzie’s world, raising uncomfortable questions. Take Mac’s hyper-responsible cousin Fran, whose idea of fun is buying household appliances, for instance. Would this woman really let Mac stay with her rent-free and never pressure him to get a job? McKenzie has a gift for thinking big and a knack for developing offbeat characters. Her deliciously nasty portrayal of the aging genius Charles Ware suggests that she might make a master satirist. Whatever she turns her pen to next, may she give her imagination free rein. 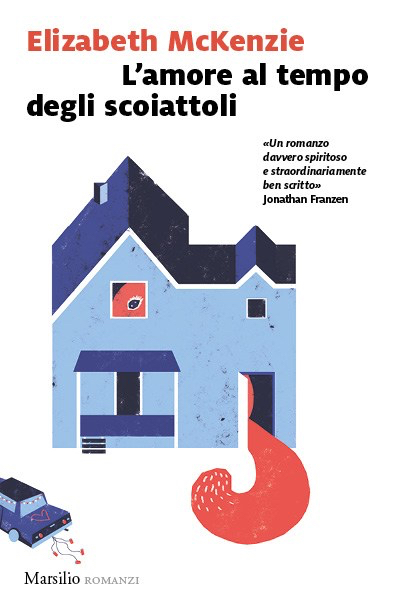